While in attendance Crouch, who is running against Cathy Osten in the 19th Senate District, entered the dunk tank to help raise money for the Lebanon CT Little League. Barbara Crouch was dunked twice, once by a little league player and once by a local man.

While at the Lebanon Fair Crouch said, “It’s great to get out and meet the people in Lebanon. It’s so easy for our leaders in Hartford to forget about towns like this. The Malloy tax hikes have put agricultural towns like Lebanon in jeopardy across the State.”

Evan Evans, who is running against Linda Orange in the 48 Assembly District, echoed these feelings saying, “Twenty years of one party rule and twenty years of Linda Orange are enough. Even if it were Republicans holding on to power for this long, I would speak out against them.”

Michael Ninteau, who has personally endorsed Barbara, said, “It was a pleasure to have Barbara and Evan at the fair. It’s very important that they get out and meet the constituents. I wish her all the best and know that the RTC will be supporting her this November.” Mike Ninteau is the Chair of Lebanon’s Republican Town Committee.

“It’s very important that Republicans show unity this year,” Crouch said. “The Osten-Malloy economic agenda has failed the state. And, that is the same failed economic agenda that Hillary Clinton wants to bring to the entire country,” she continued. 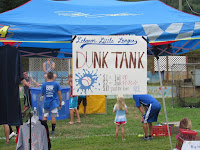 In another show of unity, Barbara Richardson Crouch will be marching in the Moosup VJ Day Parade th Senatorial District against former Representative Timothy Bowles. “Any Democrat who voted for the last two tax hikes should be swept out of office. It doesn’t matter if It’s Cathy Osten or Linda Orange. Frankly, Timothy Bowles shouldn’t get a chance to vote for any future Malloy tax increase either.”
to support fellow State Senate Candidate Heather Somers, who is running in the 18