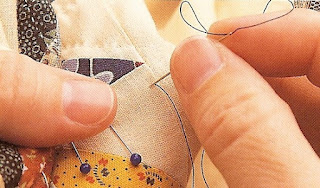 Submitted by Tom Pope of the Opining Quill


Congregational Church, woman of different faiths and traditions.  A collection of mostly older woman, it appeared to be a gathering of grandmothers.  They had come together with the idea of making a community quilt to sell for charity.


Agnes, a woman of eighty, tried to run the meeting as best she could but everyone had an opinion and many were intransigent.  Coming together with a meeting of the minds on a single quilt was soon tossed aside and it was decided they would meet through the winter and each would work on their own quilt.  The idea soon morphed into a spring quilt show.  Mabel was the oldest and sat quietly off to the side.


Each week through the winter the group would gather to share stories and hand sew another patch or two to their quilts.  Mabel watched, said little and only sewed on small patches each week.  As the other quilts grew in size the others realized Mabel was doing things a little differently.

Mildred soon reached out to Mabel and asked if she needed help.  Mabel simply explained, “My hands are frail and I sew a little slower now, so each week I come to enjoy the company, and work only on parts for my quilt.  During the week I sew each of the pieces slowly together at home when I can think about the meaning of each new patch and how it fits, into the total picture, it would be hard for me to haul the quilt here each week.’

The cold New England winter nights were warmed by the chatter and laughter as the women stitched.  Olga was proud of the progress with her Scandinavian design, she had learned to quilt at her grandma’s table.  Anne was creating a tribute to her granddaughter and her love of flowers.   Holly thought her town historical theme would surely win grand prize.   Nobody paid much attention to the little squares of cloth Mabel slowly sewed, they were more consumed by their own quilts and the appearance of their neighbor’s quilt.

On the last Saturday of May just before Memorial Day the woman all arrived early at the community room, each to hang their quilt for the afternoon show.  There was a buzz in the air, as each lady hung her finished quilt, the judging would be at noon.  At 11:00 Rachael noticed Mabel’s spot was empty and word quickly passed as thoughts of concern spread from mouth to ears.

At 11:20 a tall young man with a big box opened the door.  There coming slowly up the steps was Mabel, “I hope I am not too late, I just could not carry my quilt”.  She showed her grandson where to put the quilt and asked if he could be the one to hang it.  “I want the next generation to understand, who we are” she said.

He opened the box and ever so gently with reflection of reverence he lifted the quilt sewn by his grandmother’s frail hands and hung it up for all to see.  The room fell silent, as the others gathered around, before them was more than a quilt, before them was a work of art, a treasure of perfection.  There was no doubt in anyone’s mind the Grand Champion Blue Ribbon quilt would be Mabel’s.

What hung before them looked like a tribute to America.  A quilt large enough for a king-sized bed, with an American Flag in the four corners, along the borders were the faces of people from different cultures, and ethnicities.  The patches were filled with outlines of each State and patches depicting professionals like firemen, teachers, doctors and barbers.  There were famous American’s like Lincoln, Teddy Roosevelt, Ulysses S. Grant and Ronald Reagan.

The women swelled with pride on being an American, a country so diverse and tolerant, a country more tolerant than the group had been when it first got together.  The display was not complete, for each entry had to be finished and had to have a title card.  It was nearly noon, Mabel’s card was not hung and one square in the middle was covered with a tissue.  Rose asked, “Why it was hung without being finished?”

Mabel smiled and said, “I wanted all of you to see my work without preconceptions, to think about it with an open mind, to understand what a big tent we have in this nation, that we are a sum of our parts, working together to accomplish great things for our great nation”. Voices rang out, we get it, you are so right, and some began to chant USA, USA.

Mabel raised her hands to quiet the crowd, she had only 30 seconds to finish her display.  As her grandson took out a card and pinned it to the top, Mildred tore away the tissue, and with that she yelled, “It is time to come together”.  The card read, “The Republican Party” and the center patch was the face of Donald J. Trump.

Editor's Note:  The moral of the story; is, while we (the Republican Party and the country, generally) are as diverse, opinionated and independent as the lady quilt-makers, we share a common culture (as represented by the Congregational Church) and a common goal (as represented by the spring quilt show).  “It is time to come together”, as the card read; to unite as a party and a country and defeat the evil that has already gotten its foot through our door.
By Middletown Insider - May 11, 2016