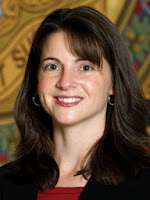 HARTFORD – State Representative Christie Carpino  (Cromwell/Portland) successfully championed a bill to provide more state oversight of local health districts. Senate Bill 355 - An Act Concerning Local Health Districts will permit the Connecticut Department of Public Health to audit a local health district if there is reasonable suspicion of an impropriety committed by the director or employees.

“This legislation adds a level of protection for residents of towns, such as Portland, that are incorporated into local health districts,” explained Rep. Carpino. “If there is reasonable suspicion of an impropriety in the health district, the DPH will have authority to intervene and protect members of the health district. I commend the efforts of my colleagues on the Public Health Committee for helping create good public policy.”

“I want to thank Representative Carpino for working hand-in-hand with me on this,” stated Portland’s First Selectwoman Susan Bransfield. “Together, we identified an issue and worked towards a solution.”

The bill must be acted upon favorably by both the Senate and House of Representatives before the end of the legislative session, which adjourns on Wednesday, May 4th, in order to become law.

State Representative Christie Carpino represents the 32nd District of Cromwell and Portland. She is Co-Chair of the legislature’s Program Review and Investigation Committee, and sits on the Judiciary and Public Health Committees.
By Middletown Insider - March 17, 2016