Kyron Horman: Missing for Over 5 Years, Needs Your Help 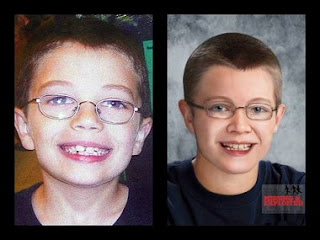 Kyron Horman was 7 years old when he went missing from Skyline Elementary School in
Portland Oregon, June 4th, 2010. He hasn’t been seen since.

Why is that important to us here in Middletown, Connecticut? Because if your child went missing, you’d want someone in Portland, Oregon to be just as concerned. I have to admit, I was vaguely familiar with this case, when a new Facebook friend reminded me of it. I am a father myself, and I would be destroyed if my child ever went missing, and with this case, Kyron has been gone so long, that it is entirely possible that he traveled to this side of the country. He could be among us right now, and without knowledge, we wouldn’t know it. It’s a fairly complicated story, but one that needs to be told.

Kyron and his Step-Mother, Terri Moulton Horman, arrive shortly after 8am on June 4th, 2010
at the Skyline Elementary School, for the school’s science fair. At 8:15am Gina Zimmerman, the
PTA President arrives, and see’s Kyron and his Step-Mother in front of his exhibit. At 8:45am,
Terri Horman leaves, reportedly after seeing Kyron walking towards his classroom. At 9am,
another student see’s Kyron near the South Entrance of the school, according to Sheriff Dan
Stanton, but later retracts that statement.

At 10am, Classes begin, and Kyron’s homeroom teacher, Kristina Porter, reports him absent. It should be noted that this is the first time anyone reports Kyron absent, or missing, and Kyron is never seen again.

At 1:21pm Terri Horman posts photos of Kyron at the science fair, on her Facebook Page. At 3:30pm, Terri goes to meet the bus, and discovers for the first time that Kyron was reported absent. It’s later revealed that Kaine Horman, Kyron’s father, is with Terri to meet the bus. At 3:46pm the Skyline School secretary calls 911 to report Kyron missing, and the police arrive simultaneously at the school and at the Horman home.

I could continue to go on with the timeline, but needless to say, it is very involved, and rest assured that the alarm is sounded, search parties are formed, and searches of every inch of local land is searched, to no avail. In fact, nothing, no evidence is ever found of Kyron.

Facebook pages are created, reward money is raised ($50,000), and a website is made
(www.bringkyronhome.org), are all done.

Later in June, it seems a huge rift is caused between Kaine, Kyron’s father, and Terri, his step mother. Although Terri was never charged or named as a suspect, she was given a polygraph. She was actually given three, and failed them all. Later, on June 26th, 1 of 2,  911 calls come from the Horman home. The first was classified as a “threat”, the second a “custody issue”. What’s very clear is Kaine and Terri are done.

Kaine takes Kiara, the couples 19 month old daughter, and leaves the house. In the following days, a
restraining order is taken out against Terri Horman. There is a point on June 28th, where People
Magazine asks Terri Horman’s Father, whether his daughter will be arrested, and he replies
“50/50”. July 8th, Kaine Horman asks a Multnomah County judge to make Terri Horman
vacate his house. On July 12th, Criminal defense attorney, Stephen Houze,  notifies the court that
Terri Horman will not contest her husband's restraining order or his push to force her out of
their Portland home.

Unfortunately, the timeline from here goes on for much longer that I can write here, but I’ll touch on the highlights. Kaine and Terri divorce. Kaine gets full custody of Kiara, their daughter. At one point, Desiree Young, Kyron’s biological mother, files a civil lawsuit against Terri Horman, seeking $10 Million in damages, and accuses Terri of kidnapping, and compels her to reveal what she did with Kyron. The suit is later dropped. Terri Horman tries on a few different occasions, failing each time, to have her name changed.

To date, it’s cost the State of Oregon over a Million dollars to conduct an investigation in to the disappearance of Kyron Horman. No Evidence has ever been found. Perhaps it’s just speculation on my part, but I think the only person who can shed light on what happened to Kyron, is Terri Horman.

On September 9th of this year, Kyron would have turned 13 years old. As Thanksgiving approaches,
his family will have yet another holiday without their son. We hold out hope that Kyron is alive
out there. With the time that has passed, he could be anywhere. Please look at the picture, and if
you think you’ve seen Kyron Horman, please call the Multnomah County Sheriff’s Office at 503-
261-2847. Help bring this boy home to his family.
By Middletown Insider - December 01, 2015