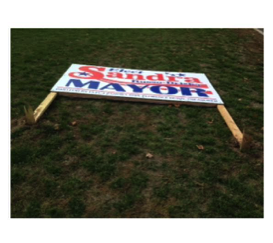 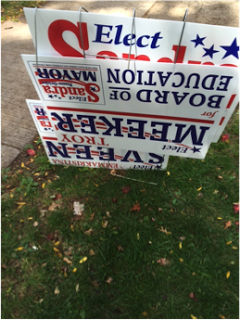 Press Release
Middletown Republican Candidates Lawn Signs Vandalized
Widespread Citywide Destruction Found Early Saturday Morning
Middletown CT, October 17, 2015: Linda Bonaiuto-O’Hara reported today that residents, supporting Republican candidate Sandra Russo-Driska and members of the Republican under ticket, awoke to widespread destruction of lawn signs on private property.
“If one or two small yard signs were damaged or missing, you would chalk it off to a random Halloween vandalism,” said Bonaiuto-O’Hara.  “The damage and destruction was, however, citywide.  From the north end of Middletown to Randolph and Saybrook Roads. Republican signs were found broken, damaged or simply missing.  This was organized.”  The value of the signs range from the smaller staked signs valued at $7.00 a sign to the 3 larger damaged or missing signs with a value of $810.  “Whomever is responsible is not going to deter us, our candidates or our supporters,” stated Bonaiuto-O’Hara.  “This was the action of a thug who has no respect for private property or opposing points of view.”
The campaign has filed a police report with Middletown Police.  Property owners are cooperating with police as they look for the person(s) who caused the destruction and trespassed on private property.  Property owner’s are also reviewing any security camera footage and will be turning over evidence on the crime spree.  Anyone with information is encouraged to contact the Middletown Police Department.
By Middletown Insider - October 18, 2015

Email ThisBlogThis!Share to TwitterShare to FacebookShare to Pinterest
Labels: its ok to hate and perscute conservatives