Now for Some Good News: Wood Bison Not Extinct

The Good News: Wood Bison are thriving amidst the massive Alberta Oil Sands project and the United States could become energy independent and claim the title of the world's leading producer of liquid energy. (details below) 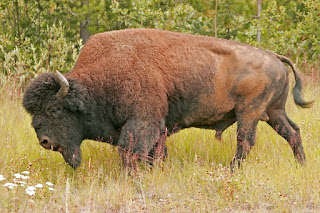 Two articles in the Eurasia Review caught my attention today. I learned that Wood Bison, the largest terrestrial animals in North America and long extinct in the U.S., have been brought back from the edge of extinction and may be found placidly grazing near the massive Alberta oil sands project in Canada. This formation contains the third larges proven reserve of crude oil in the world.


The last woods bison in the United States was apparently shot by a hunter in West Virginia around 1835. For many decades, the woods bison was presumed extinct – until an airplane spotted an isolated herd in the muskeg swamps north of Alberta, Canada...The bison living at the oil sands recovery site are direct descendants of the remnant herd found in 1957. They were busily browsing about 300 yards from a huge diesel shovel that loads 400 tons of oily sand at a time into a lineup of huge trucks. The trucks carry the sand toward a giant “cooker” where the oil is steamed out...

The oil sands extraction methods are twofold: surface mining with shovels and trucks;  drilling and steam extraction from the deeper beds. As one area is exhausted the Canadian government reclaims title to the land and complete restoration of the landscape is undertaken.


...The tar sands are a geological marvel: an 84,000 square miles deposit – an area the size of Kansas – but the sand is soaked with 5–25 percent heavy petroleum. In total, the Alberta sands are estimated to contain 169 billion barrels of oil, making it one of the largest petroleum deposits in the world. Experts say the oil sands’ operations could produce 465,000 U.S. jobs in construction, refining, petrochemicals and other sectors by 2035, if President Obama finally lets the Keystone XL pipeline go forward...(emphasis added)


The oil sands article led  to another in the same publication asserting the U.S.could become the world's largest supplier of liquid energy surpassing, at some point, the output of Saudi Arabia. U.S. output of liquid energy is increasing with the development of oil shale formations in North Dakota, Utah, and Colorado. October 2012  oil production in North Dakota hit 747,239 barrels per day, The Green River oil shale formation in UT and CO, yet to be tapped, is estimated to contain upwards of three trillion barrels dwarfing the output of OPEC. 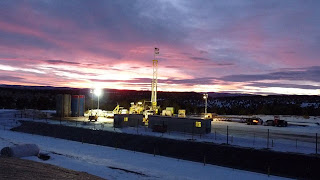