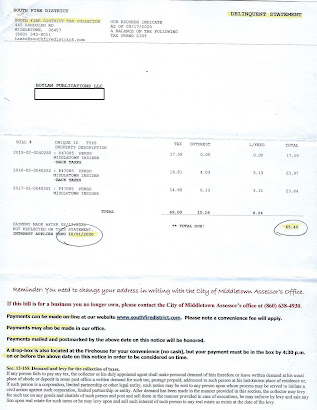 In August of 2017, four months after moving to Ohio, I incorporated Boylan Publications, LLC in . . . the state of Ohio.  The Middletown Insider falls under BP, LLC, and began selling advertising on it.  To date, BP, LLC has not received one dime in revenue from said advertising.  That is because Google will only send a payment when advertising sales reach $100.00.

At some point after August, 2017, tax assessor Damon Braasch saw the advertising on the Insider and decided to tax it, sending tax bills to an address where I no longer lived.  Somewhere along the line, he (and the tax collectors) got my Ohio address and started sending bills, there.  (How he got either address, I do not know.)

Braasch did no research whatsoever to determine where Boylan Publications was located, he assumed, incorrectly, it was in Middletown.

While visiting in 2018, I went to his office to talk about the matter.  Being more than two years ago, I don't recall much of the conversation, but basically he said that BP could be taxed because it sold advertising and was "about" Middletown.

I'm now getting tax bills from The South Fire District.  When I spoke to tax collector Cindy Gotta about the tax bill, she advised me to call the assessor; there was nothing she could do.

So, I gave the idiot a call.  He asked if I ever filed a Declaration of Personal Property.  No, why would I; I'm in another state!  I don't remember ever getting one, either.  Then, he says I have to appeal to The Board of Assessment Appeals, which only meets in March.

What he didn't tell me, is that The Board "hears" the written appeals application, according to their web site.  "The form must be submitted within the prescribed deadline for an appeal to be heard."

Does this mean the appellant has to be present at the hearing?  I think it does; this from the application form: "PLEASE BRING IN ITEMS INCLUDING BUT NOT LIMITED TO PHOTOS, APPRAISALS AND OTHER DOCUMENTS THAT WILL AID THE BOARD WITH THEIR DELIBERATION."  And, "ALL APPOINTMENTS WILL BE SCHEDULED".

This would mean I'd have to travel to Connecticut, attend the hearing, and return to Ohio.  That would cost me three days pay, plus travel expenses!  Far more than the $65.40 tax bill!

I'm will not do that and if Braasch thinks I will, then he really is an idiot!  Come and get me Damon!